10 Questions to Ask Your Wedding Videographer 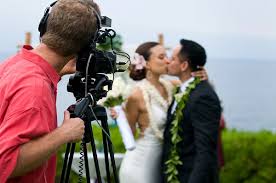 The quality of wedding films differs drastically. It can be like comparing David Dickinson to George Clooney; good tans and full heads of hair don’t make them equally appealing. Always ask to see a full wedding DVD version of at least two weddings the wedding videographers have filmed. Don’t be fooled by a few pretty shots on a showreel or an Institute Of Videography logo; do your own research.

The package is all-important. Decide what you would really like to be filmed and ask for it. There will never be another chance to capture those moments. A good videographer (for example from West-Films http://weddingvideocalifornia.com/ )should be accommodating and understand if you decide you don’t want the bride’s preparations filmed but do want the groom walking to the church. It’s all about being clear and flexible and open to negotiation.

The music you love should direct the pace and feel of your film so make sure it’s your choices influencing your film, if you’re not sure ask for suggestions and look at the music the videographer uses on their DVDs. Some will not give you flexibility, but the price they charge will reflect this. You can’t expect miracles if you’re only paying a few hundred pounds.

This can vary from 4 to 12 weeks. During this time your wedding videographer should take great care over the attention to detail in picking out the best shots, colour correcting and sound mixing.

Make this clear to your videographer and if you can provide photos in advance. Equally make sure they know exactly who should be in the film, you don’t want to watch your day 2 months later and find there’s no shots of your granddad.

This makes a huge difference to the type of film you will be getting. Relying on one camera can limit the amount of footage your film will include. Multi-camera films will capture a great deal more of your day; the extra details, friends, family and many moments you would have missed.

Editing is equally as important as filming; ask who will be editing the film. When it comes to videography you really do get what you pay for. Some videographers are just that; videographers. They will film your day then send footage to an editor who works to a template to make your film. Other videographers are not just skilled with a camera they know how to edit, it makes a big difference.

Good videographers know what they’re doing, however, always make clear what and who you want to be filmed and make sure they have a clear itinerary of the day. It takes time to set up a good shot, give them notice.

You really don’t want or need this. If you’re happy with your final film there is no need for you to see anymore, you truly will have all the best bits.

With the emergence of HD filming and DSLR film-making, the quality of good videography has never been so high. HD stills can be a nice add-on to the service of a wedding videographer, but they could never replace the work of a dedicated photographer.