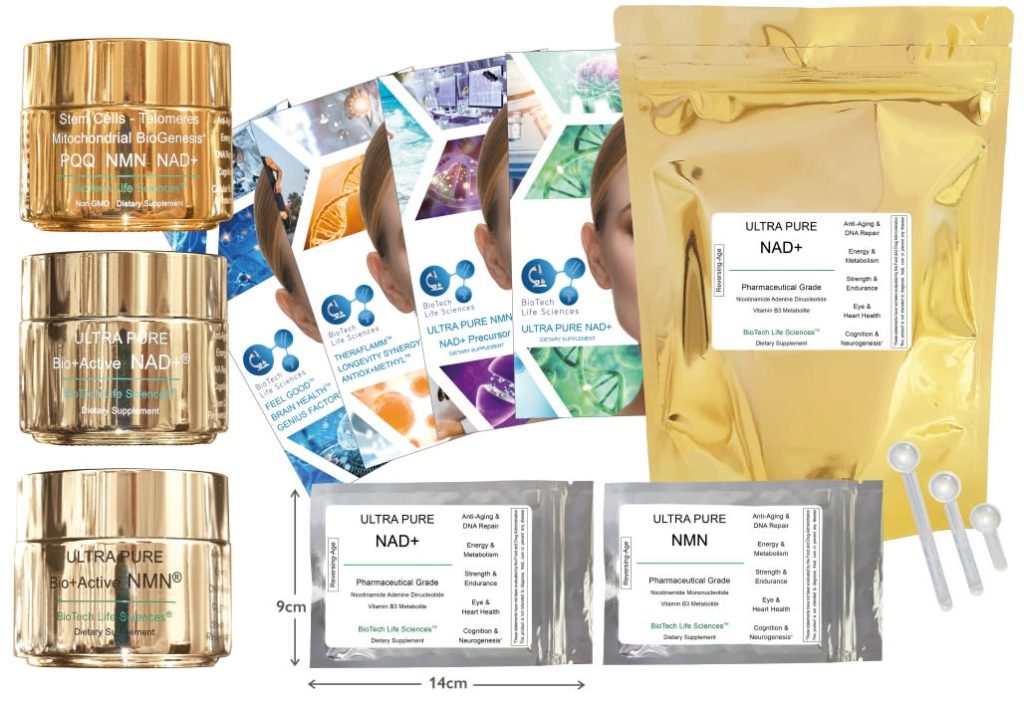 We received some NAD+ & NMN from the team at BioTech Life Sciences and we were beyond happy with the package it came in, the product itself and the benefits we felt almost immediately from one scoop.

Do you remember those days when you were younger, when you could?

Maybe those days have been gone for a while, but not forever.

We experienced this first-hand from taking 250mg every day of NMN supplement.

Now you may be asking….

They are in every cell of our bodies and are naturally-occuring.

NMN is a precursor of NAD+ and is required to make NAD+.

NAD was discovered back in 1906 and is one of the earliest molecules on the planet – found in every cell of our bodies.

It helps us convert our food into energy (ATP) and we can produce it from exercise, fasting and restricting our calories.

When we received our NAD+ & NMN from the team at BTL Science, it came in a gold package and inside were:

BioTech Life Science sent us one of each to try as they said their customers experience different effects which is dependent on each individual.

Many customers had felt a nootropic effect from NAD+ & better cognitive benefits, while NMN was better for physical benefits such as more energy.

We started off on the smallest dose of 250mg once a day and within a few hours we felt a noticeable feeling similar to a runner’s high.

Upon asking the guys over at BTL, they mentioned that this was common but some people felt the effects a few week’s down the line.

What Are The Ingredients For NAD+ & NMN?

BTL are very knowledgeable about their product, the industry itself and the latest research coming out.

They mentioned many of the companies out there selling NAD+ & NMN were adding fillers, offering doses of such small quantities and not getting their product 3rd party tested.

BioTech Life Science have done none of these for their products and have included Pharmaceutical Grade NAD+ & NMN that is typically 99.4% pure.

No fillers are added and they mentioned that the only extra ingredients will be in their flavoured versions which will have natural, organic flavouring + mannitol in them.

Their flagship products include either pure NAD+ or pure NMN – nothing else!

Benefits We Felt From Supplementing With NAD+ & NMN

The main benefits we felt were a noticeable uplift in energy – both in mood and physically.

As mentioned earlier in the article, it felt like a runner’s high.

But we also felt other benefits such as:

We also noticed that we had more endurance when running and more strength when lifting weights.